Once you’ve picked yourself up off the studio floor, wiped away the blood and tears, and walked out into the daylight for the first time in months, there’s really only one thing to do next:

Here are 4 tips for throwing an album release party:

1) Have CDs to Release

The cardinal rule of throwing a CD release party: Have your CDs in hand before actually booking anything. Nothing is more embarrassing for a release show than inviting a bunch of people, hyping up your album, and then not actually having copies to give away.

We’ve said this before: Shit happens!

Mixing and mastering revisions can take longer than expected. Things can get held up at the pressing plant. Artwork can get flubbed. There are an endless number of things that could potentially delay the process.

Avoid having a release party with no albums to release! Play it on the safe side and avoid booking anything until you have your album stock in-hand.

2) Only Order What You Need

Be realistic about what you’ll sell or give away. The flip side of having no albums is having too many. You don’t want to get stuck months (or years) after your release with boxes of albums that you couldn’t move.

Keep in mind, once you play your release show (and maybe a string of tour dates), your core fan base -the ones willing to pay for your music- will then have your album. They’re not going to buy it again the next time you play in town.

Unless you have a significant fan base or are planning an extended tour, consider pressing a short-run for your release show. You can always press more afterwards. 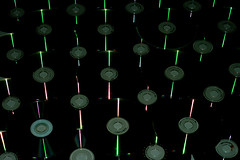 3) Put Together a Strong Bill

This is going to be your big event, but it doesn’t hurt to invite some other bands that can help fill the room. Putting together a great lineup of artists can make the entire night memorable, and generate more buzz before and after the show.

More importantly, inviting other bands gives you a great chance to reach out to a new fan base that may not have heard your music. Use it as an opportunity to convert someone else’s audience into your new fans.

4) Plan a Pre and Post-Release Strategy

Figure out what you want to accomplish with your album and lay out a strategy for before and after the release to help you achieve those goals.

Figure out what kind of media coverage you’d like to get. If you’re looking for radio play, you’ll likely want to send your album to stations a few weeks in advance of your release party. Invite music reviewers and bloggers to your show (offering a guest-list spot will be more enticing) and let them know that you’re available for interviews.

You might consider releasing some content (a single, music video, etc.) a few weeks in advance of the release to generate buzz. Figure out how you want to promote the show (Social media? Posters? Emails?) and plan accordingly.

Have an idea of what you’re going to do after the release party to keep the buzz going. Maybe you’ll follow up the release by announcing more shows, or by putting out a second single or video.

Do you plan on shopping the album around for reviews? Maybe you’ll make a push for licensing or sync opportunities.

You’ve put in a ton of legwork to make your album and throw a release party. Don’t let the momentum fall flat by failing to prepare a post-release strategy!

Have any tips for putting together a great album release party? Post them below!