From time to time I’ll question why I’ve willingly entered a financially tanking industry…. Piracy has flipped the music world on it’s head, music has lost it’s tangible value, and the business models that have made the industry successful for so many years are lying in tatters on the internet floor.

Aside from the simple love of music, my answer always comes back to the same things: creativity and innovation. The cultural and economic climate created by the internet, file-sharing, and social media, forces the music industry to reinvent itself.

With a non-existent “status-quo”, the doors to innovation have been blown wide open. We’re throwing new ideas to the wall and seeing what sticks. Scary? Sure. Exciting? Hell ya!

And every once in a while something comes along that’s so simply brilliant, my faith in the power of ideas is restored. Last week I had one of those “holy shit!” moments. Beck announced that his next album will be released… wait for it…

Solely as sheet-music. No mp3’s, no vinyl. Just a 108-page illustrated book with 20 song scores.

Hear that? That’s the echo of my mind blowing up. Here are three reasons why I think Beck’s sheet-music release is brilliant: 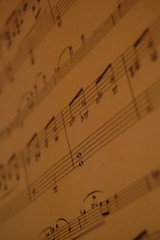 Music As An Experience

Industry professionals have been saying for years that music as a product no longer holds tangible value. iTunes can grab 99 cents for a song, but if a listener want to get the song for free, there’s really nothing stopping them. The value of music is no longer in the tangible, dollar figure of a song, but in the experiences that listeners can connect to their music.

It’s no secret that success in today’s industry means bands must connect with their audience on a more personal and interactive level. We’ve seen countless unique ways in which bands are connecting with their fans. Things like Twitter chats, poster design contests, and private house concerts, are all ways in which artists can add value to their music and create intimate experiences for the consumer.

Beck is taking the concept of fan interaction to the next level. As Forbes writer, Will Burns, states, “It’s more than an album. It’s an invitation“. By offering sheet music and asking fans to create the songs, he’s including them directly in the process. Fans don’t just enjoy the record. They ARE the record. Unlike cover songs -interpretations of an original version- audiences work from the sheet music to create their own unique Beck album.

You can be certain that the vast majority of people who create their own interpretations of the sheet music will share the content. The marketing force behind the idea is that fans (creators, and listeners) will want to hear all the different variations of the songs. Burns calls this the “curiosity incline”.

Not only is fan interest piqued before any of the music has been released, once interpretations start hitting the internet, audiences will seek out multiple variations of the song; finding versions they like the best, and comparing other interpretations to their own.

Beck’s songs are going to be created, shared, covered, tweaked, discussed, featured and spread like fire across social media platforms. The best part? While fans are self-promoting their own works, they simultaneously promote the Beck brand.

After thousands of versions of these songs have spread around the world, who isn’t going to be curious to hear the songs performed as Beck had in mind?

Burns has the right idea when he suggests Beck wait a year before releasing any of his own versions. Give the fans time to embrace the opportunity, enjoy the experience an idea like this creates, allow them to build the hype, then roll out the concert.

Beck could invite some of his favourite performers onstage, or he himself could perform his favourite fan-created versions of the songs. The opportunities for a second wave of fan interaction are endless.

While discussing Beck’s “album” release with a friend he said, “I never thought I’d see the day when sheet music is considered an ‘innovation'”. It speaks volumes to the power of the internet and social media, as the digital age gives sheet music a whole new context. We’ve reinvented the effectiveness of a three-hundred-year-old medium.

Of course you can draw plenty of questions from the release announcement. What about fans who can’t play music? What about those who just want to hear Beck? But for a moment, I think it’s important to appreciate the brilliance of the idea.

At a time when the music industry is fighting to build the next big app, or generate the newest buzz-worthy promotion, Beck uses the conditions of the digital climate to reinvent an age-old concept. Incredibly unique, and yet so astonishingly simple.

What do you think about Beck’s announcement? Think it’s pure genius, or just plain silly? Let’s start a discussion! Post your comments below.