Previous Next
Great Music Publicity Tips To Grow Your Career

The folks over at CD Baby have just put out yet another awesome DIY guide for musicians. The latest offers “10 Music Publicity Hacks You Can Use Right Now” (it’s FREE!).

The guide runs through some key elements of a successful music publicity campaign, and offers great tips for gaining journalist and media outlet attention.

The best part of the guide is that it caters to all bands. Both groups that have hired a publicist, as well as bands doing their own PR. Here are a couple tips we thought stood out:

We’ve alluded to this one in some of our posts about getting blogger attention. The sole fact that you’re putting out a record or have a show isn’t enough to gain anyone’s attention. Furthermore, journalists have heard every cliche in the book. As the guide suggests, “if you see a cliche, cull it ruthlessly”.

Instead, focus on providing the target outlet with a great story, or multiple story angles. If you aren’t sure where to start, this guide offers some great suggestions.

– Write out compelling aspects of your songs.

– Do your instruments have a story behind them?

– Use a crazy road or studio story

The important part is making it unique or exciting. Something “sticky” that will trigger a reaction from a journalist and grab their attention.

Hack 3) Get On Stage

The more you play live, the better your chances of getting press coverage. Here’s an interesting quote I’m grabbing right from the guide:

Almost anyone can record an album on their computer, pay to have it mastered, and plunk down a thousand bucks to press a first run of CDs (or, for even less money, have a digital download). To get on a stage of any note, at least one other person has to say “OK, yeah, I’ll take a risk with this band.”

Playing in real venues ups your chances, and as the guide points out even getting a couple shows in bigger markets will build momentum. And “second-tier” cities still have great media outlets and often less competition for music coverage. 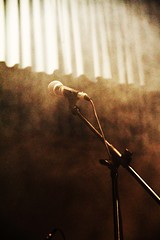 Hack 4) Withhold Your Love With Exclusivity

Rather than sending out your pitch to 500 journalists, focus on the one whose coverage might positively impact your band the most. Maybe there’s one journalist at a great local outlet whose word is well respected in your genre. Offer to give an exclusive interview or content in advance of your show.

As the guide notes, this might be difficult to grab if you don’t already have some buzz or relationships in a market, but it’s worth considering for the long term. Different outlets might be more interested in covering you if there’s the possibility of exclusivity.

Concert promoters often keep comprehensive lists of local media outlets and journalists, so it’s worth asking if you can get a copy of their contacts. It’s in their best interest to get as much coverage and bring out as many people as possible, so they’re often happy to share.

And most promoters want to see bands actively promoting their shows. Kind of a two-birds scenario: get some press coverage and actively get into promoter’s good-books. Occasionally a promoter might not want to share their press list, but it can’t hurt to ask!

– Tag the venue in your social media posts

– Interact with fans who comment on their social sites

Our “Editors” note:  Press coverage snowballs, and a few key pieces of good press can show other journalists that your band is for real. Always keep your press coverage organized and use the great quotes whenever you can!

CD Baby run a pretty awesome DIY blog for musicians. If you haven’t checked it out, it’s a great resource.